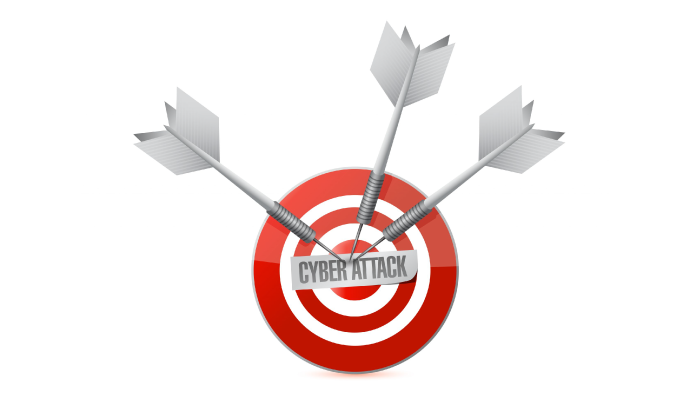 We’re now well into the pandemic and we have seen seismic changes in society, uprooting ideas we once held as principle – avoiding social contact, hybrid/remote working and consumption moving online. To adapt to this new world, businesses have been accelerating their digital transformation, moving their infrastructure to the cloud, and outsourcing services.

Indeed, the statistics from independent and government reports on attacks make clear that SMEs are a significant target: 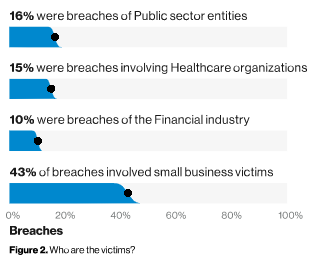 While all organisations, irrespective of size or industry, are at risk from cyber threats, this doesn’t mean they’re an inevitability. There are measures which can be taken to prevent and mitigate such risks. The first step to a more secure digital future is to admit that you might be at risk, and then to take action to remedy it. 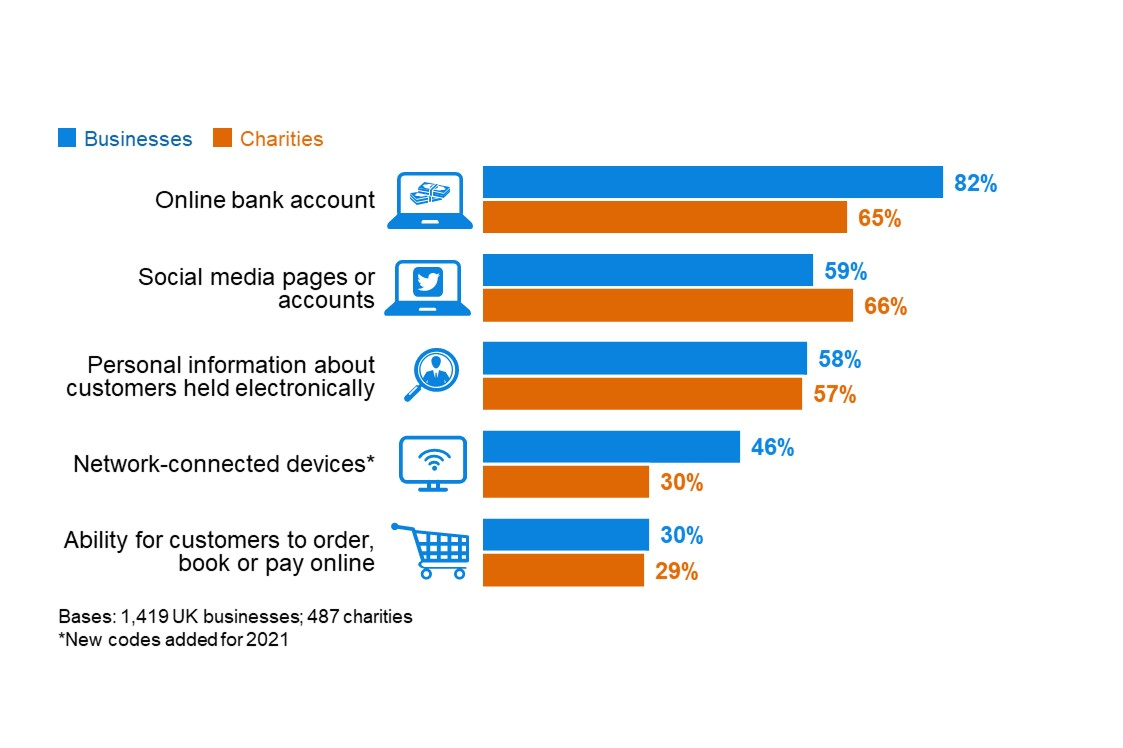 The chart above illustrates the digital footprint of organisations and their reliance on technology for basic functions. A successful cyber attack would likely render these unusable, or alternatively compromised – meaning that they could be used for fraud or other malicious purposes.

The risks of a cyber attack cannot be understated, as the costs are significant – not only encompassing the direct financial loss but also regulatory fines (e.g. GDPR), trust and reputation loss, and the lost business and operational impact from downtime.

While antivirus will play a part within an organisation’s overall cyber security, it is not sufficient. The role of the traditional antivirus is to defend against known malware threats, but it cannot defend against threats it cannot identify. Indeed, around half of organisations have identified exploits and malware evading their antivirus solution.

The cyber threat landscape is fluid and ever changing, with complexity of malware and volume of attacks continually growing. To stay safe in this environment, organisations must adapt to this flow or else they risk being swept away by the tides.

Investing in an endpoint protection solution (examples include CrowdStrike, SentinelOne, CybeReason, Carbon Black) will allow your organisation to protect your devices (often called “endpoints”). These are also called ‘Next-Generation AntiVirus’ (NGAV) which supersede the traditional antivirus with a combination of artificial intelligence, behavioural detection, machine learning, and exploit mitigation, so that known and unknown threats can be anticipated and prevented.

Going further, planning and risk mitigation are vital to a good security posture. Starting with plans for incident response (how do we react when an incident occurs?) and business continuity (how do we keep our business operational when an incident occurs?) will provide a basis for future and ongoing planning and awareness. These can then be built on by the business, expanding to cover more areas and increasing the depth of your initial plans.

Cyber threats are often conflated with external threats, with high-profile attacks by external or nation-state actors naturally being more prominent. While this may appear true at first glance, there is substantial evidence which indicates that internal threats are significant and rising: 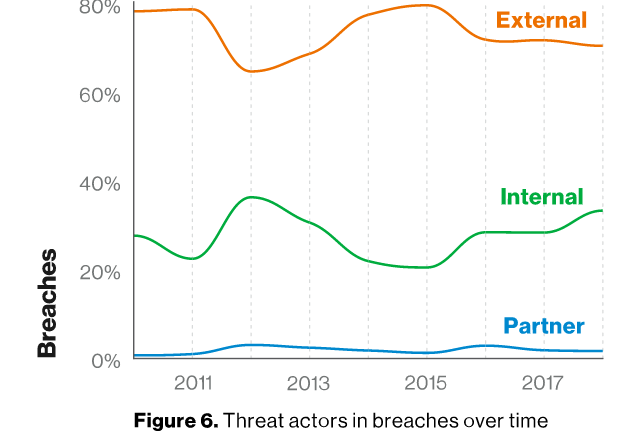 While the majority (69%) of attacks proved to be the work of outsiders in 2018, internal offenders involved themselves in a significant proportion (34%) of the incidents.

These statistics offer some sobering thoughts: cyber risks aren’t only external and could be executed from within the organisation. While this doesn’t mean that you shouldn’t trust your colleagues or partners at all, each device or endpoint should be treated as a possible threat – as if they could be malicious, or at least controlled by a malicious actor.

Internal attacks are not typically malicious, but are instead often accidental. Typically these are where data is sent to the wrong party. In the unusual scenario where there is a malicious internal attack, the intent is to disrupt operations and possibly to steal data and defraud the organisation. Such an attack is more effective due to insider knowledge and can cause major disruption including sensitive data leakage.

These potential risks can be mitigated through careful planning and compartmentalisation:

Having these measures in place substantially limit the exposure and impact of a successful cyber attack. An MDM solution is particularly valuable in this scenario as it would facilitate policies, controls and hardened configuration measures to be enforced without the chance for colleagues to mistakenly disable or misconfigure their device.

An underutilisation of IT or simply the lack of an IT department can often lead to a false perception that an organisation doesn’t have any IT, or that it doesn’t require IT to function.

However, if we stop to consider the reality, it’s difficult to imagine an organisation which doesn’t have any systems or networking; even the most offline of organisations. If the workplace is connected to the internet or there are any systems, including industrial systems, then the potential risk to cyber security exists.

A famous example is the Stuxnet virus, which targeted and destroyed Iran’s nuclear centrifuges and reduced their nuclear capability. These nuclear facilities were known to have no networking, however they did have industrial systems which could be targeted. While these were actions taken by nation-state actors, they highlight the risks clearly to even non-networked systems and how malware can adversely impact industrial systems.

In the case of an organisation which has limited IT infrastructure, core security measures previously mentioned will ensure that this doesn’t pose a risk to the rest of the business. These include implementing a “hardened” operating system configuration (particularly disabling auto-play and USB devices); drafting an incident response plan; and backing up core data separate from your network, ideally encrypted and protecting access with multi-factor authentication.

“Cloud providers take care of all our security”

Another common myth is that cloud providers take care of cyber security. While this is true to an extent as these advanced providers protect their own infrastructure, this does not extend to content & services hosted on the platform itself, or to the configuration or setup of that infrastructure.

Each customer organisation is tasked with managing their own content/services and their own configuration, which includes cyber security management. This leaves your organisation to manage the ports, services, firewall rules, and other endpoints which could potentially be vulnerable.

Managing cyber security risks in this case will require knowledge and competence with the technologies offered by the cloud provider in order to secure them. While the particular settings for each cloud-provided service will vary, there are some typical checks which should be carried out when deploying to a cloud environment:

You’re only as secure as your configuration

At the heart of security it’s not necessarily who you are, or what products you use, but the configuration of your infrastructure, devices and network which is the primary factor in determining and mitigating risk. That is, you’re only as secure as your configuration.

Here at KYND, that’s what we focus on. We’ve developed pioneering technology that makes cyber risks simple to understand, quick to monitor and easy to prevent. Our aim is to stop cyber risk affecting any business, big or small, basic or advanced. If you’d like to find out more or see a demo, get in touch and we’d love to chat. 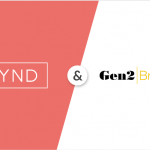 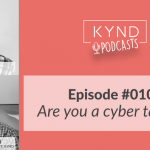